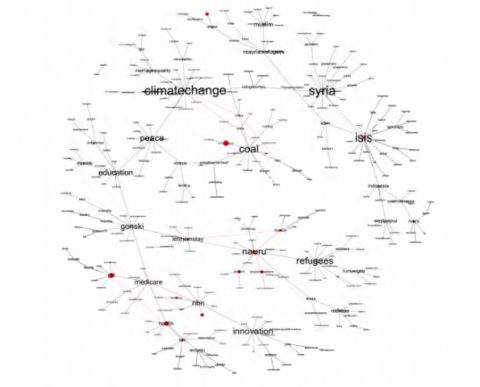 Professor Robert Ackland along with researchers from the University of Canberra: A/Professor Mathieu O'Neil and Dr Michael Jensen (in a private capacity) appeared at a public hearing held by the Select Committee on Foreign Interference through Social Media, held on Monday 22 June 2020.

In December 2019, the Senate resolved to establish the Select Committee on Foreign Interference through Social Media to inquire into and report on the risk posed to Australia’s democracy by foreign interference through social media. The research team submitted an approach to studying interference through social media, which involves the use of computational methods (network and text analysis) and data visualisation techniques. The study aimed at identifying styles of IRA troll account activity in the Australian political Twittersphere, utilising a large-scale Twitter dataset collected over a year (September 2015 to October 2016).

Below are excerpts from media articles covering this issue:

Professor Rob Ackland, at the Australian National University, said he and University of Canberra researcher Mathieu O'Neil had studied about 70 troll accounts active in the Australian political sphere in 2015 and 2016.

The accounts were from the Russian Internet Research Agency. He didn't give details but said one had used the account to build influence with relatively innocuous tweets that changed once an audience had been garnered.

A number of troll accounts had been focused on refugees, again starting with relatively mainstream views, but morphing over time to send more insidious messages, such as comparing Manus Island asylum seekers with Islamic state terrorists.

Associate Professor O'Neil said they had followed one troll for a year to analyse the modus operandi.

The account, which produced as many tweets as the others put together, had spread headlines from news media about Australia, focused on "depressing" news, of bungles, businesses closing, cancer cases rising, stories of death and destruction, and wheat crops failing.

"This is definitely something that's originating from a foreign country. So why are they doing it? What's the intent here?" he asked.

"Obviously the intent is a form of psychological warfare, increasing a sense of despondency, undermining belief in common values and trust in institutions, making Australia a place where things are bad, nothing is working properly.

"Ultimately, I think the aim is to increase divisions in society, making associations between minorities and evil figures."

A joint study by UC’s News and Media Research Centre and the ANU’s Virtual Observatory for the Study of Online Networks Lab examined Australian political posts on Twitter from 2015 and 2016 and identified some linked to the Russian propagandist Internet Research Agency.

The study identified 70 accounts that had authored 535 tweets or retweets focused on Australia featuring one of a group of hashtags used commonly in local political debate. It identified three kinds of Russian troll behaviour: building an audience for future influence, seeking to steer debate on particular issues by linking them to current events, and causing disruption with divisive interventions.

The ASPI report also identified these tactics, with apparently Beijing-backed tweeters linking the recent Black Lives Matter protests in the United States to protests in Hong Kong and suggesting US police violence proved that pro-democracy protesters should not be looking to the US as a model.